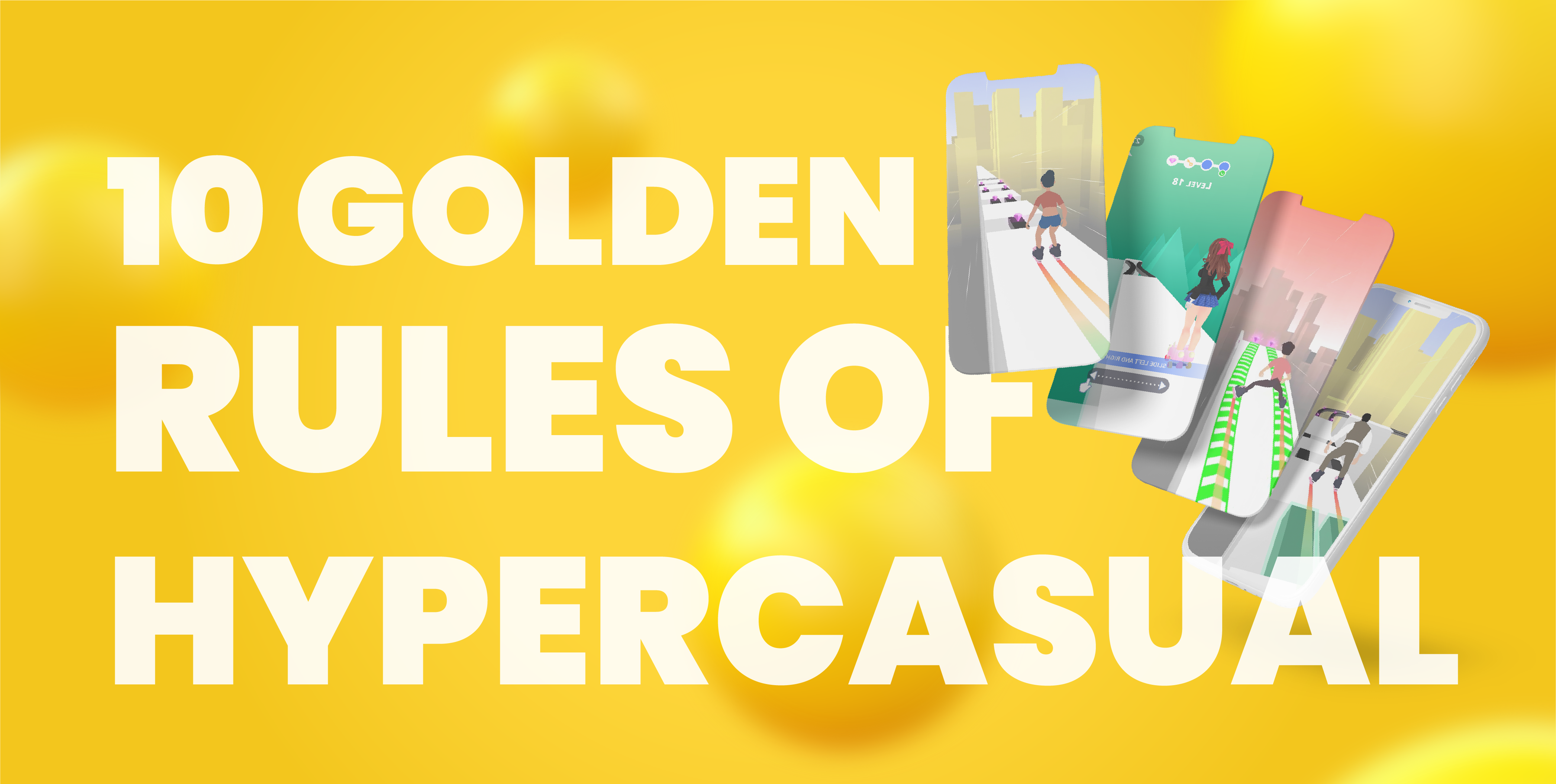 In whatever genre you’re developing games, there are always best practices that have been established by the industry. Hypercasual is no exception in that regard, but there are some rules you should follow when developing a game that are unique to HC. Here are Homa’s top 10 rules to live by when creating a game in this booming sphere of gaming.

If your idea is unique, you’re likely to gain interest quickly. People tend to get tired of games they feel like they’ve already played before. As tough as it is to innovate, coming up with a brand-new concept is one of the major keys to getting consumer attention. While there is a finite number of mechanics available, it’s important that you put a spin on it to make sure you’re not just copycatting others who have had success already. Plus, it’s easier to market something that’s brand new!

This is a well-known strategy for almost everything. Keep it simple, stupid. HC, more than any other genre in the world, needs to keep the number of game mechanics extremely limited. We’re talking less than three. If a player needs to think about more than two things he or she has to do to succeed, it’s already too complicated. This actually applies to almost all facets of a Hypercasual game, but we’ll get to that a bit further down the list.

Because HC players tend to play in very brief spurts, developers should create games that can be played anywhere at any time. Keep the inputs easy and non-invasive to the places they might play. If big sweeping motions are necessary to move the hero of the game around, players aren’t likely to play in public as they may feel embarrassed. Make sure that players can easily play anywhere at any time.

Pro tip: Make sure your game it’s only playable in portrait mode.

‍Developers should make their games for mass appeal. While it might be hard to keep your political ideology out of your passion project, it’s important to remember that there are so many differing opinions out there. You want to keep your games light and enjoyable for everyone, regardless of gender, age, or culture. It’s also a good idea to keep it general: choose broad themes instead of specific topics like middle ages, knights, and so.
‍

Celebrating successes by players is a crucial part of building a winning title. Beating a level in a game is a reward in itself, but it’s always helpful to make a big deal out of it. Throwing in some beautiful visuals or even sounds will help amplify a player’s excitement of having reached a goal.

Another pro tip: Add as many visual rewards as you want during playtime for extra juiciness, even every 3 seconds it’s OK. The more the merrier.

‍HC players love playing when they’ve got just a few minutes. Whether they’re in an Uber on the way to the office or taking a quick five minutes from doing chores around the house, players need to be able to get in, reach a goal, and get out quickly. That’s why Homa suggests keeping levels (in level-based games) beatable in under forty seconds. If it takes any more time than that, players may feel like they’re just doing another chore.

For all the gamers out there who love a challenge, Dark Souls is the bar by which all others are measured—a grinding, unforgiving slog through some of the most difficult and frustrating hours you’ll ever face in gaming. Think of your HC game as almost the complete opposite of that. HC players want something that they can beat without too much fuss. As a developer, you’re a much better player of your own game than most players ever will be, so if it’s tough for you, think about how frustrating it will be for them.

Building a simple, uncluttered UI is critical to performing well in the HC genre. Let the gaming experience do all the work for you. There’s very little reason to take up any screen space in-game with extras. The full focus of players should be on the action.

If you have an onboarding process and tutorial at all, they should be clear and concise. The whole reason a player picks up Hypercasual games at all is for the freedom they allow. They can be played without much explanation and enjoyed in brief moments of down time from their everyday lives.

Everyone has passion for things they create, but if the data tells you to go a different direction, then that’s what you need to do. If you can find a way to let feedback (the constructive kind) drive your decisions, you’ll have much better long-term success than you will if you fight it to keep something you feel passionately about. The market decides what works and it’s up to you to respond to it.

Well, there you have it, Homa’s Top 10 Golden Rules for building a great HC game. If you follow these, there’s no doubt your creation will become a hit.
If you already have a hit waiting to be published, we want to hear from you! Make sure to submit your game here.

Part 2: We walk you through the user acquisition and monetization process and introduce you to necessary partners on this 2-part series.

Part 1: We walk you through the user acquisition and monetization process and introduce you to necessary partners on this 2-part series.