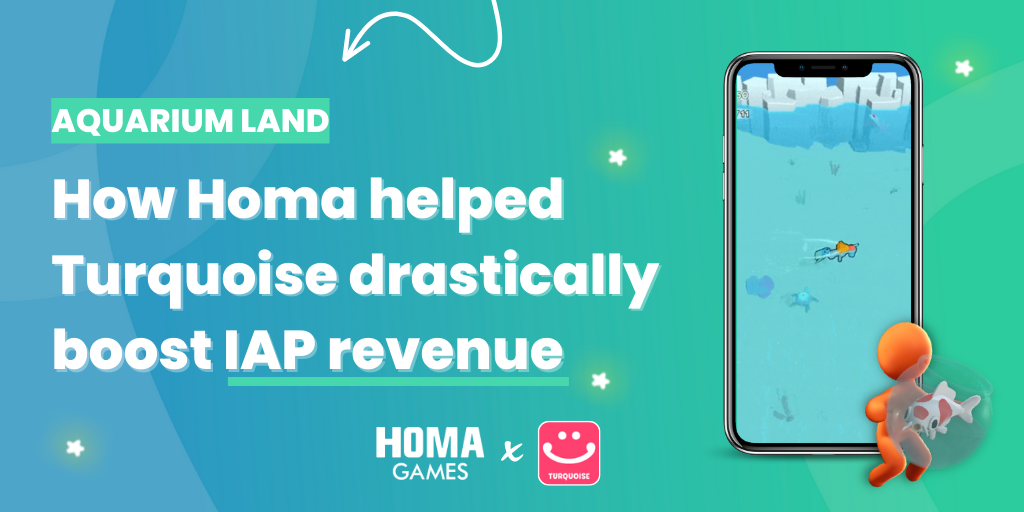 Turquoise Game, a mobile game studio based in Turkey, reached out to Homa with a promising Hybridcasual game prototype.

‍
The Arcade Idle title they developed, Aquarium Land, was innovative due to its core loop based around hunting new fish, the rare fish collecting meta game along with their high quality visuals. The prototype was polished and showed good initial retention—43% D1 on IOS.

However, the game was also facing other issues: low effective Cost Per Mille (eCPM), low Rewarded Videos per user (RV), and most importantly, a lack of feeling of progression that was hurting late game completion. For instance, during iteration, Aquarium Land US eCPM on Android was $22 for RVs, close to 30% below standards, when an average for Arcade Idle is $30.

Turquoise Game also hadn’t yet devised an In-App Purchase (IAP) strategy for the game and this is one key area Homa decided to tackle early on. The methodology section will unveil the process of helping on the game development and design of the IAP strategy.

Homa Games collaborated closely with Turquoise during the game’s development, providing value and expertise in the areas listed below.

‍Homa's team redirected the game in a more Idle direction, which led to a 3 point increase in both RRD1 and RRD3. They developed several features to create long-term motivation for players. Introducing an automated worker feature as part of the fish collecting, this led to an increase in retention and sizable monetization opportunities—25% of gems are spent on the worker feature (unlocking, temporary boost, permanent upgrade).

‍Turquoise and the PM have worked in synergy with the game loop to reach IAP’s best practices, which brought IAP to 25% of the revenue.

The Homa team tested what content was most appealing to customers and optimized economies per OS and geo thanks to 100+ remote configuration variables. They designed an adaptive offer system and polished the merchandising, game UI popup's look and feel and also the in-game store layout. In addition, Homa added more visual polish to the store and gems, the visual effects to the Starter Pack and even more packages which brought great value.

‍Homa implemented a longer-term growth strategy and a Hybridcasual approach: three months on the product iteration, including one month at high user volume, before pushing the user acquisition even more.

The team is now experimenting with event-based campaigns to reach a more IAP-driven casual audience.

‍The team is still working on the game, delivering features at scale to double IAP LTV over the following months. Continuous feature optimization increased RRD1 by 4pts, RRD3 by 3pts, and IAP LTV by 56% on IOS within two months.

After extensive work, the team achieved the goals they had set for the game at the start of the iteration phase. Aquarium Land now boasts the following KPIs on IOS US:

Most importantly, Homa’s contribution to the product led to an LTV uplift of 17% within two months.

Download and check out the Aquarium Land today! Available on IOS and Android.
Do not hesitate to reach out to Homa’s team and submit your ideas if you want to publish the next hit.