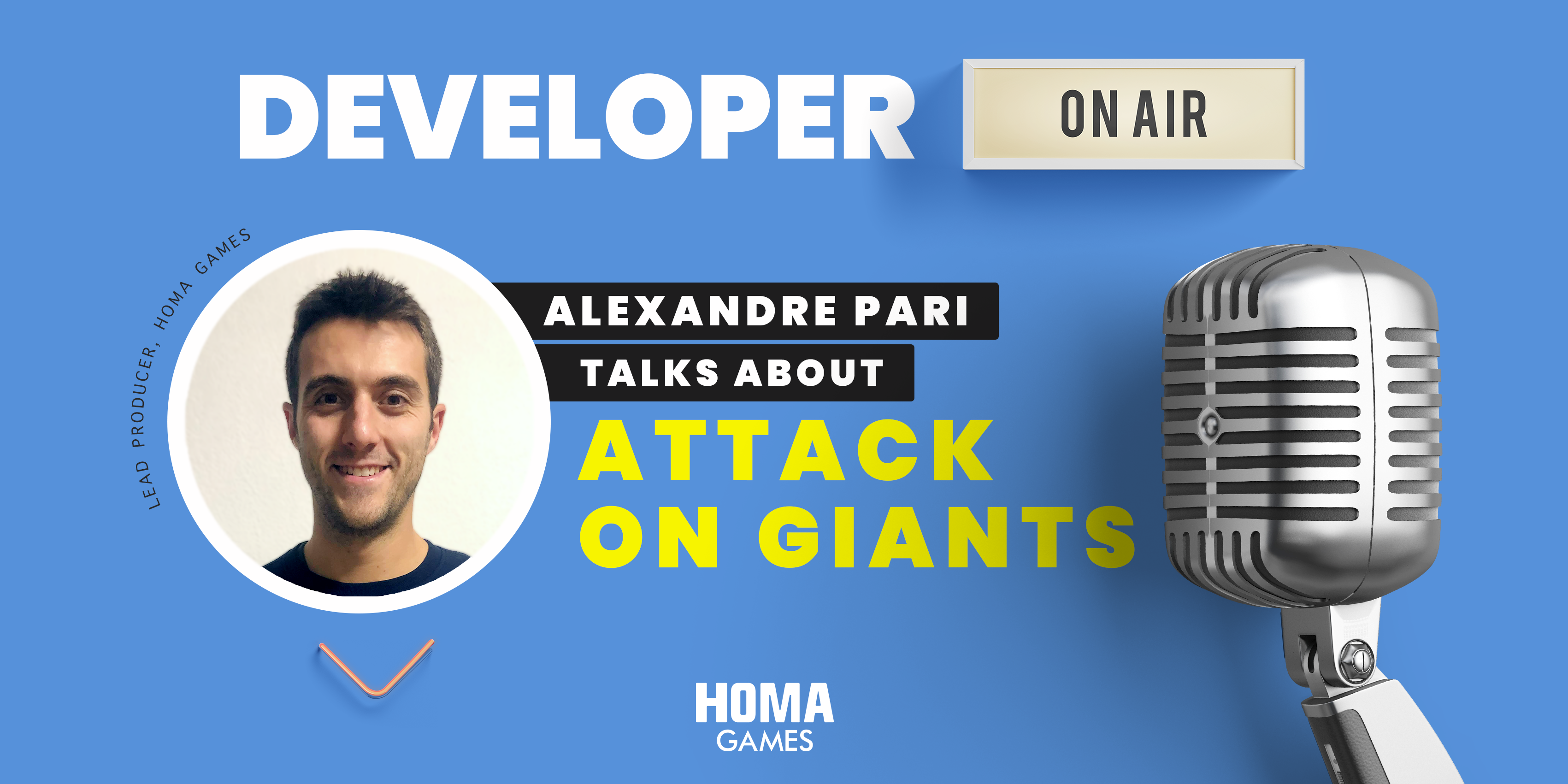 In this series, we dig deeper into the game creation process to find out how developers unlock creativity. This time, we talked with Alexandre Pari, Lead Producer at Homa Games, about his experience with Attack on Giants.

I’m working in the internal production team, the studio in Paris is composed of nine people (one producer, five developers, two artists, and one game designer).

2. What are some of the benefits and challenges of working solo/on a team in game development?

For Attack on Giants, two developers, one artist and one game designer are involved in the game. The big advantage is that both developers can work on separate tasks (core gameplay and meta for example) and allow us to go faster.

3. Were you always interested in mobile gaming? What motivated you to get into this industry?

I have been working in the mobile video game industry for over 5 years. Joining the internal production team of Homa Games is a real advantage compared to creating my own studio because we benefit from all the experience, the knowledge of Homa Games, and their striking force.

4. So your team's latest published game was Attack on Giants—can you tell us the inspiration behind this game?

The main inspiration is from “Attack on Titan” anime.

5. What motivated you to keep working on Attack on Giants, a game that ended up hitting the top charts?

6. How long was Attack on Giants in development for?

The first version of the game was made in less than two weeks and was released in early March.

7. Can you provide us with some numbers? How many downloads does Attack on Giants have?

On Android, we will soon reach the 2 million downloads while on iOS we are only at 200,000 (it’s only the beginning).

8. Could you tell us three reasons why Attack on Giants was a top hit?

Of course, the first one comes from the anime “Attack on Titan” and the fact that the last season was being broadcast during the first release. Then, the rhythm of the game is quite powerful and accessible which makes it its strength. And finally, the speed of execution and team consistency allowed us to go fast and avoid endless development cycles.

Everyone in the company can propose an idea based on a pitch and some references, and a team is responsible for reviewing the concepts.

Our main focus is on core gameplay, it must be as attractive as possible and easily understandable to everyone.

As many we use Unity with internal tools that allow us to go faster.

Being able to get rid of the integration and maintenance of advertising SDKs, attribution, analytics, and many others allows us to save a lot of time and invest it in the game.

Content yourself with the bare minimum for your first version and confront the market as soon as possible.

Some had predicted the end of HC but the fact is that the stores are more and more filled with this type of game and that the competition is more and more fierce which allows us to always surpass ourselves!

A lot of surprises! Stay tuned...

Reach the first million downloads for Attack on Giants!

By drawing inspiration from everything I see in daily life, by avoiding technical barriers and playing as much as possible at competitors games.

Play Attack on Giants for free on iOS and Android.

If you are interested in joining Homa Games' teams, don't forget to check our open positions.