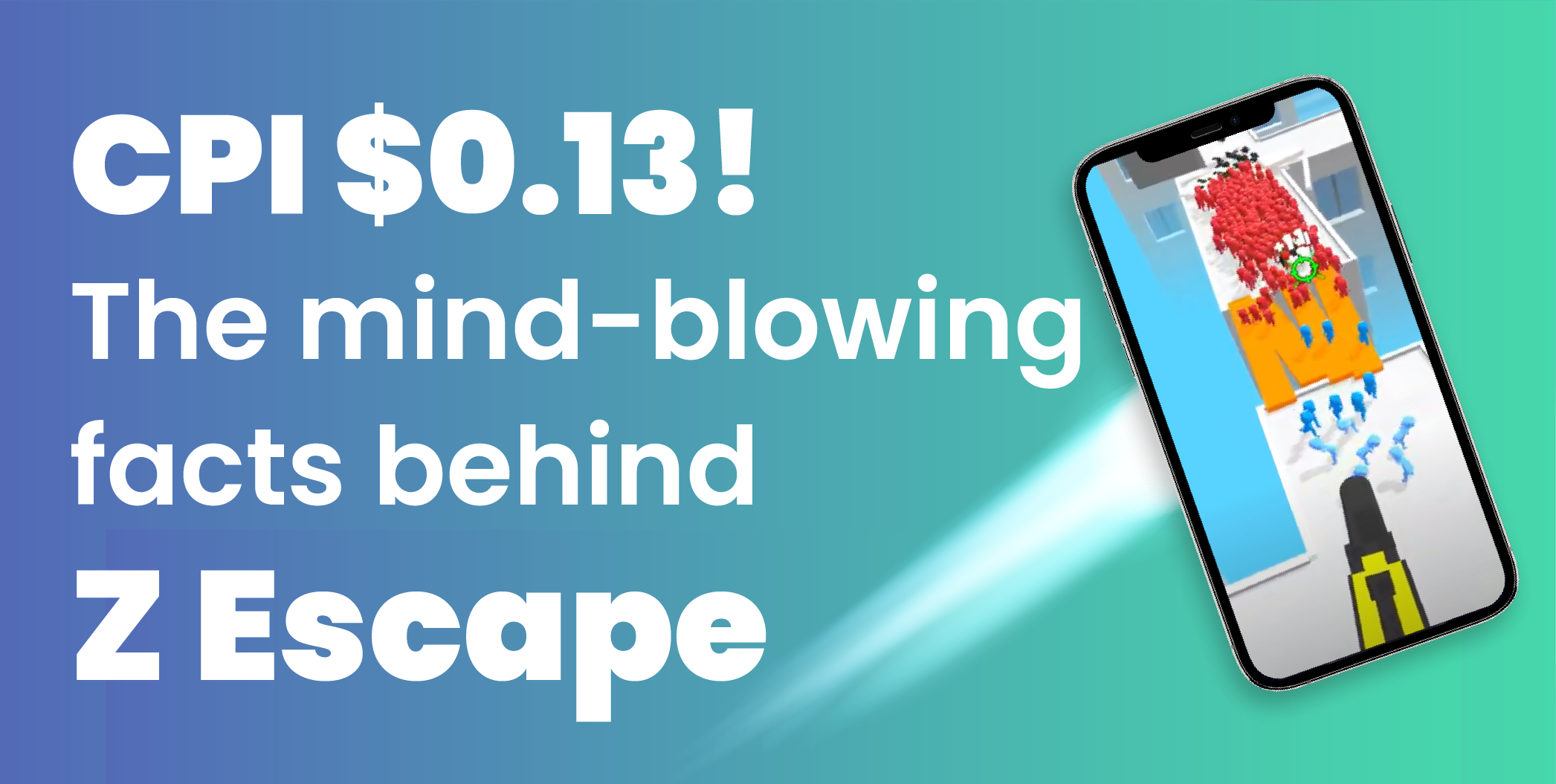 As the Hypercasual game industry matures, game creativity is no longer solely dependent on developers’ whimsical ideas. More and more publishers will analyze fashion trends by observing the market and testing data, and provide developers with data-based product directions.

This was the case for Z Escape, released by Homa Games in March 2021, and one of the reasons why the game made it to the top charts in locations like the US (Top 3 in iOS and Android) and China (10th place among all free app downloads in App Store and top 3 in games category!).

It is worth mentioning that behind such a successful game there is a new Hypercasual team established less than a year ago. Let's take a look at the story of how Z Escape went from a creative idea to project start, development, and finally tuning and launching.

Z Escape fits well in the category of Hypercasual. The goal of the game is to protect citizens escaping on the roof by eliminating enemies chasing them. The operation of the game is simple and easy to understand: players only need to use one hand and one finger to aim, and the weapon will shoot automatically.

The game has minimum development in terms of colors: there are only three colors in the game—red, orange, and blue, and the background is a gray-white building. This kind of color matching turns the contrast of the colors stronger and makes it easier for players to grasp the core elements and quickly understand the gameplay.

Z Escape was developed by Yorf Studio, a young team composed of five people and located in Paris. In a sense, they are just newcomers in the Hypercasual game industry. Alexis Subias, co-founder and CEO, said that the idea of ​​creating a game company started seven years ago. The goal was to form a team that had sufficient professional capabilities and expertise but also its own distinctive attributes in relation to other companies. After discovering the huge potential of Hypercasual games, Alexis decided to found Yorf Studio in 2020 and officially entered the field.

Since its creation, Yorf Studio has been continuously developing and testing prototypes. Before Z Escape, the studio had already created and tested 10 Hypercasual game prototypes. Although the results were not completely satisfactory, in the process of ongoing development and testing the team continued to improve its understanding and awareness of Hypercasual games. Later, a close cooperation with Homa Games allowed them to leverage their prototypes and to grow rapidly.

"I can now accurately say the reasons for the failure of the past 10 products, which includes creative factors, lack of market awareness, or workflow issues. But through the cooperation with Homa Games, we have clearly identified the problem and will not make those mistakes again. The cooperation for Z Escape has especially given us a more efficient work flow and a higher level of project control", said Alexis Subias. "Now we are analyzing the market daily, looking for potential hot games, and we are also observing life. Looking for fashion trends on the things around you is a great way to discover game creativity".

Homa Games attaches great importance to the interpersonal relationship between developers and publishers, a principle followed by all its employees. Homa's good reputation in the market is also the key to cooperation with their partner studios. At the same time, feedback is an essential part of its corporate culture, which also deeply strengthens the business relationship between the two parties. Paying attention to every detail, as long as there is a slim chance of hope, we will not give up any product. Alexis said that "Homa Games is happy to work with developers to help them grow. We communicate every day, and we can speak freely, and they will listen to and help if there is any problem. This is why we chose to collaborate with them".

How it all started

In order to help partner developers to grow faster, Homa Games regularly collaborates with their R&D teams to share the latest trends observed. Z Escape was born from this main premise. In February 2021, Homa's publishing manager Lucas was having a brainstorming session with Yorf, during which he shared a trend from Homa's latest market analysis: the "crowd effect", that is, the satisfaction caused by a large number of people gathering on the screen and moving in the same sense.

This trend was the starting point of the Z Escape project. The two sides discussed the gameplay, camera point of view, and other aspects in depth, and finally determined the first-person shooting gameplay. By matching the continuous retrograde lens movement, the vision of a blockbuster movie can be achieved. This effect, along with the theme of protecting citizens, could be perfectly integrated to the gameplay and hence defined the direction of the project.

CPI 0.13, a mind-blowing prototype with a 12-minutes game time

The success of the game is also inseparable from a full investment in research and development. According to Lucas, it only took a week from the project launch on March 1 to the official CPI test of the game. And that prototype already demonstrated the potential of the game: 13 cents CPI and nearly 12 minutes of game time.

A race against time became the common goal of both parties: in the next two weeks, Yorf Studio, with the assistance of Homa, completed the design of 50 levels, added a weapon store to the game, and incorporated IAP, ads, and a monetization structure. The whole process took less than 20 days. At the same time, the game also released an update during Easter, adding corresponding egg skins, a new version of the icon, and video ads.

When Lucas evaluated the release process of Z Escape, he observed that the game's cinematic lens design was very suitable for marketability. But developers can also find some more in-depth level design elements in the game, so that all types of players can play and enjoy it. The passion, enthusiasm, and hard work of the Yorf Studio R&D team also left a very deep impression on Lucas.

It is worth mentioning that the opening screen of Z Escape shows the names of two studios, Yorf Studio and Acid Cousins. This reflects Homa’s latest old-meets-new method in which an experienced development team will provide a full range of coaching opportunities to the new team during the project setting and development process. In this case, the role was assumed by Acid Cousins, a studio responsible for hit games like Tower Color, Cat and Mouse.io, and Flappy Dunk. Homa plans to continue exploring the old-meets-new model to help more developers quickly embark on the road to success, as was the case for Z Escape.

If your team wants to contact Homa Games and get help on publishing, you can send your team’s name, link to your Apple or Google store, and Skype ID to contact@homagames.com, and we will get in touch with you as soon as possible.

Homa Games is expanding its Chinese team. Positions such as motion designer (graduate or intern), unity developer and User Acquisition Manager (with domestic marketing experience) are open. If you want to join this diverse and fast-growing team, you can send your resume and works to xz@homagames.com for more information.