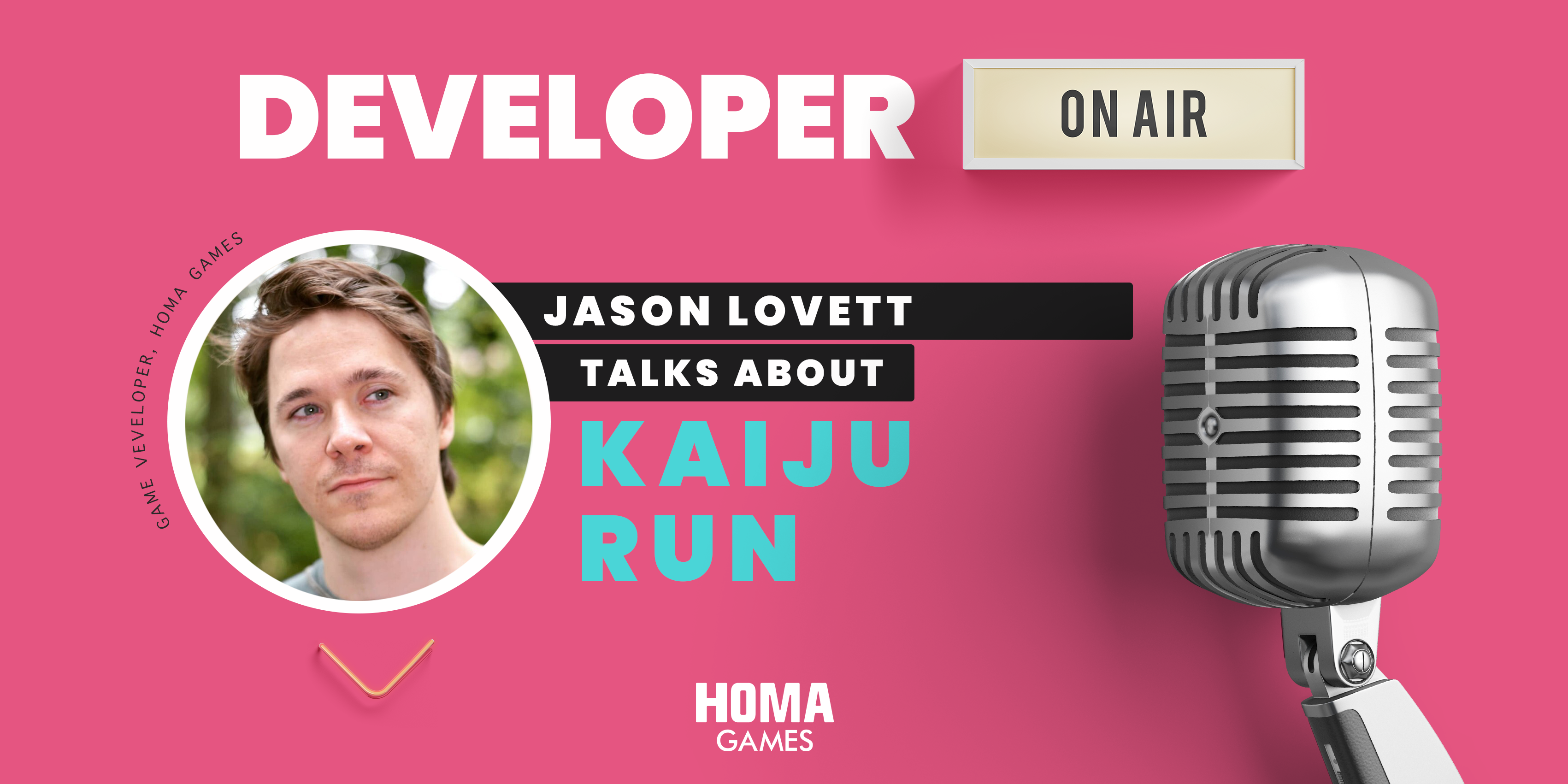 In this series, we dig deeper into the game creation process to find out how developers unlock creativity. This time, we talked with Jason Lovett, game developer at Homa Games, about his experience with Kaiju Run.

I work in the internal team, based in Paris but working mainly remotely across France. We’re a hyper-creative group of developers stuck in a permanent hackathon / game jam making crazy prototypes on a weekly basis.

2.What are some of the benefits and challenges of working on a team in game development?

What I love about working in small teams is that you don’t have to ask anyone’s permission to do something. When we’re in the prototype phase of development I work with just one artist, and it seriously feels like a mini game-jam. We come up with an idea and we quickly brainstorm and jump right into the development. It’s a super fun process and in my opinion essential in the Hypercasual industry. Time is the absolute essence and the more time you spend thinking about what to do and deliberating and hesitating, the more time you lose, which means a competitor might get it out there first.

When we’re in the prototype phase of development I work with just one artist, and it seriously feels like a mini game-jam. We come up with an idea and we quickly brainstorm and jump right into the development. It’s a super fun process and in my opinion essential in the Hypercasual industry.

To be honest I find it more of a challenge to work in larger teams, as there’s more people you have to go through in order to implement a feature or design change. Thankfully at Homa we only increase the team size at the right time—once an idea is proven marketable through our initial KPI tests. But for the initial prototyping phase I much prefer keeping it small and lean.

3. Were you always interested in mobile gaming? What motivated you to join a studio and get into this industry?

To be honest I was never into mobile gaming. I got into game development because I had a passion for Indie games; Games like Hollow Knight, Stardew Valley, Rain World and the like were huge inspirations for me. However, after working on a project solo for over a year and getting little results, I learned the value of marketing ideas and testing them before wasting valuable time and effort. When I learned about Hypercasual, I got hooked! It’s much more exciting working on smaller, and insanely marketable games at a fast rate. It’s increased my skills as a developer a thousandfold and increased my satisfaction as a creative immensely.

4. So your team's latest published game was Kaiju Run—can you tell us the inspiration behind this game?

My initial inspiration behind this game was that I wanted to make a “stacking” type game, similar to the game The Big Hit (published by Lion) and Run of Life (published by Voodoo). I also decided to start looking to pop culture and blockbuster movies for inspiration, and saw that Godzilla vs Kong was still trending. I thought I’d combine the two ideas, and it turned out to be a successful recipe!

5. What motivated you to keep working on Kaiju Run, a hit game that ended up hitting the top charts?

Well, in Hypercasual we always look at the data. We don’t waste time working on game ideas if the KPIs are not promising, even if we’re emotionally attached to them. Actually, before we tested the game, I truly believed Kaiju Run was one of my worst prototypes yet and I was ready to drop it and move on. You can picture my surprise when I saw that our KPI’s, particularly our Day 1 retention, was actually very good. I was genuinely shocked. Shortly after our first test we also started having big youtubers play our game and accrue hundreds of thousands of youtube views. Seeing that players really enjoyed the game and that it also had solid data behind it motivated us to really double down on it and make this game a chart-topper.

6. How long was Kaiju Run in development for?

We’ve been working on Kaiju Run for about a month and a half till it was finally released.
‍

7. Can you provide us with some numbers? How many downloads does Kaiju Run have?

Right now it’s at about half a million downloads, and quickly rising.

8.Could you tell us three reasons why Kaiju Run was a top hit?

Absolutely! The main reason is the evolution aspect of the game: Evolving creatures and seeing what they will become is novel and exciting. It’s very similar to why Pokemon was so popular.
The second reason is that Kaijus are a very exciting and trendy niche that surprisingly wasn’t explored in too much depth yet in modern Hypercasual games. Also, people love Kaijus!
And the third and most important reason is that the team at Homa is extremely talented and hard working—you need people that are driven by results and that work together to make something happen. There are lots of good ideas out there, but if there’s no people to make them, then there is no game.

At Homa we make quick prototypes weekly and test them in the market with KPI tests. If the game proves worthy of continuing because the KPIs look promising, then we proceed to iterate and test. Once a game is clearly profitable and successful based on the data from the iterations, then we move into a full scale production and make it a chart-topper.

For me I’m very visual. Some developers like to work on the mechanics in a sort-of black-box environment without final art and without any environment or characters. I personally like to get the visuals in as soon as possible, throwing in character assets and backgrounds that suit the game’s style. That gives me a solid foundation from which I can comfortably code the game and play around with the characters I’ve added. It also motivates me because if I work without any art I feel a lot less motivated not being able to see the big picture of what I’m making.

Unity is the main engine that I think everyone is using at this point for Hypercasual games, including us here at Homa. I don’t think there’s a secret recipe, but I will say that watching tutorials on a daily basis and constantly improving your skills by making consistent prototypes on a routine schedule will over time improve the quality of your work and ultimately improve your success rate. If you have talented people that are highly skilled in the art, design, and development of Hypercasual games, you will have better games and get better results.

At Homa we have a tech team developing a platform called HomaLab, which is an amazing platform that I use on a daily basis to track the data of the games and also to get ideas as I have visibility of other games on the market that are being tested.

At Homa we have a tech team developing a platform called HomaLab, which is an amazing platform that I use on a daily basis to track the data of the games and also to get ideas as I have visibility of other games on the market that are being tested. The best way to get ideas is to see other people’s ideas and to have more and more content to draw inspiration from, and this tool provides an all-in-one solution for that. We also use the HomaBelly SDK to simplify the integration of a multitude of SDKs, such as GameAnalytics.

Start small, and just make lots of games on a weekly or biweekly basis. On top of that, watch tutorials (particularly the ones on Udemy from GameDevTV!) on a daily basis. I still do! Constantly improve and gain knowledge. And if you can, work with or talk to other developers that know more about other aspects of game development that you’re not familiar with and learn from them.

I think that HC games are just short-attention-span games. I see that the attention span of the internet is getting small, and I think that as long as that fast-paced internet content culture is still alive, HC will stay alive as well. People think of HC as a young market trend that will die out, but I think it’s pretty much here to stay, in one form or another.

Definitely improving and continuing to develop Kaiju Run! We’ve only just started with it!

The shock of the success of Kaiju Run when we thought it would be a failure is definitely a memorable moment for me. It goes to show that you never know!

Constantly improving my skills, and constantly trying out new ideas on a consistent basis. Creativity thrives on consistency.