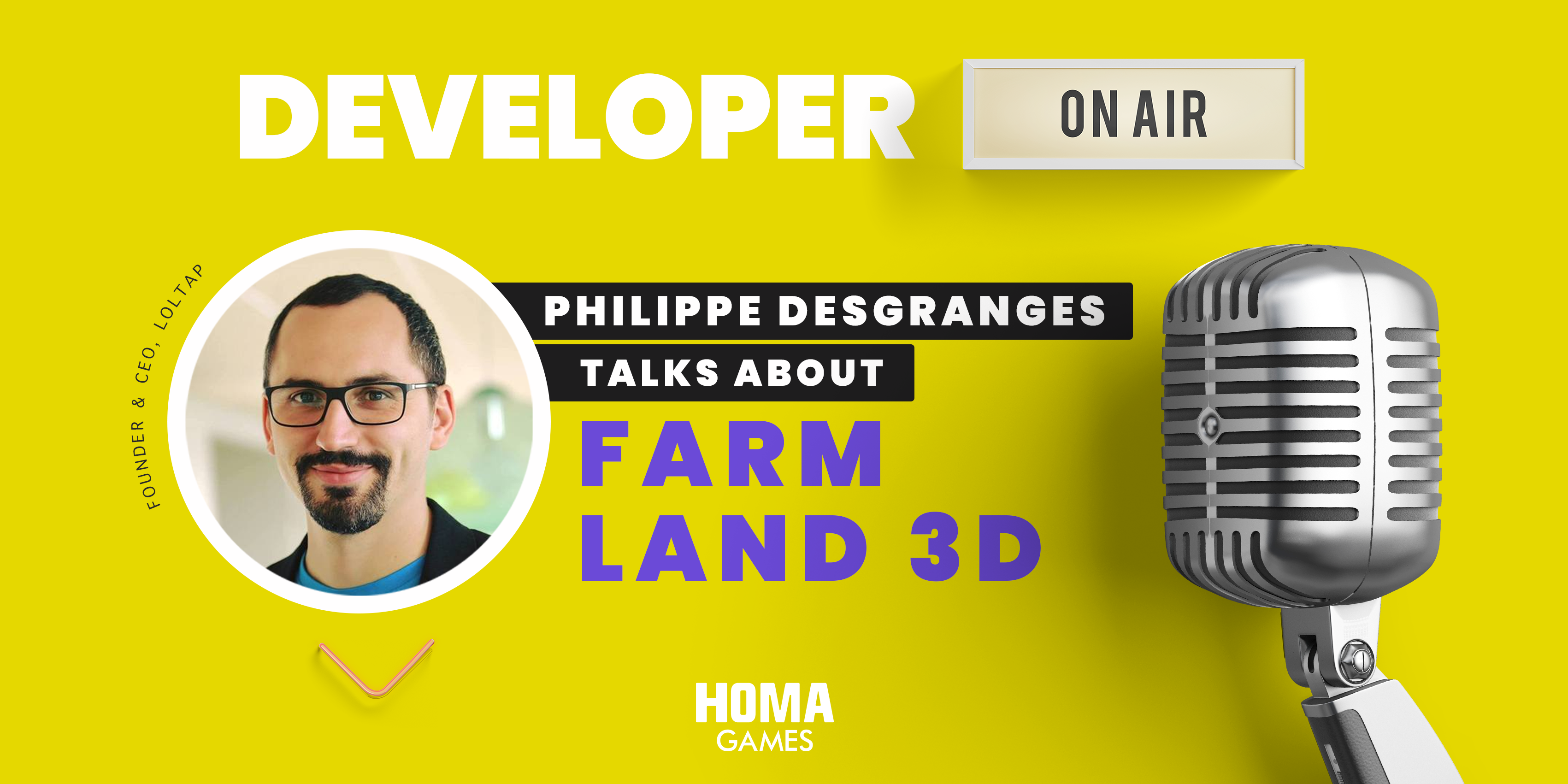 In this series, we dig deeper into the game creation process to find out how developers unlock creativity. This time, we talked with Philippe Desgranges from LolTap, about his experience with Farm Land.

1. Were you always interested in mobile gaming? What motivated you to create a studio and get into this industry?

As long as I can remember I wanted to make video games. I started coding around 9 on Amstrad CPC and never stopped learning from then. I have been professionally making games on mobile from the day it became possible starting in 2002 with Nokia Series 40 in J2ME. At the time I was doing some freelance gigs for various publishers while studying. Hardware was limited and we had to be very clever with the code to get anything moving on screen. Then I started working in AAA games at Quantic Dreams and halted mobile game development for a couple of years. Around 2009, Facebook happened and suddenly a bunch of casual Flash games I developed over nights and weekends with a friend from back in school became viral and skyrocketed to become the first company I co-founded : Kobojo. Suddenly, games didn’t have to be massive undertakings carried by huge teams to reach popular success. That was the beginning of a 6 years journey during which I evolved from a developer to an entrepreneur.

At first we were making simple casual games on Facebook with classic mechanics, quick development cycles, and agile deployment to massive audiences. Casual games grew bigger with more production value and retention frameworks, at the time we specialized in City Builders which is a genre I really like. Then Apple released the iPhone and opened the App Store and, as a company which peaked at around 80 people, it was very challenging to pivot to this new format. The last Kobojo Game I directed was Mutants: Genetic Gladiators, a midcore game playable in cross-play on mobile and Facebook in a browser. Although the game was quite successful, my vision had diverged from Kobojo’s management so I parted with the company to create my own, more indie, more agile, mobile-only venture: Mana Cube. I gathered a small team around a midcore Dungeon Crawler Collection RPG, it was a very fun game to make and we achieved shipping a full collection-battler meta, tons of content, a full fledged solo campaign, PvP, events. and live ops in a real lean fashion. However the market response was less than stellar as the game entered frontal competition with other multi-million dollar midcore games. CPIs were through the roof and, although monetization and engagement were good, the game was hard to scale. That’s when I realized I needed to pivot again.

2. How did LolTap first start?

At this point I had a choice to make: either grow bigger and face the competition head-on in the midcore space or stay small and make smarter choices. I decided to choose the latter as I loved the creative freedom that a smaller team with shorter development cycles offered. At the time something was happening on the market with very small games entering the top charts and I quickly realized that I wanted to be part of that. It was Hypercasual. I started LolTap in order to embrace the agility of a small scale studio and come back to my casual development roots. We make small games with big ambitions.

"I started LolTap in order to embrace the agility of a small scale studio and come back to my casual development roots. We make small games with big ambitions."

3. What are some of the benefits and challenges of working on a team in game development?

LolTap is a very complementary team with a broad skill set and individuals with different sensibilities. We complement each other very well and have each other’s back. I’m learning everyday from working with them and I could honestly not develop these games on my own.

There are, of course, challenges in coordinating a game development team. The most important aspect is making sure everyone understands and is on board with the vision of the project and the direction of the company.

4. So your latest published game was Farm Land. Can you tell us the inspiration behind this game?

We saw a trend of games with a slightly midcore progression meta and a Hypercasual execution, we wanted to build upon that. A lot of these games were centered around wood-chopping/stacking mechanics and we thought that we could spin that idea around towards a concept centered around growth rather than destruction. That’s how the farming idea emerged. We brainstormed about how we could boil down the classic farm sim game loop from titles such as Farm Ville, Hay Day or even Animal Crossing and Harvest Moon into their simplest expression in a Hypercasual format.

5. What motivated you to work with Homa Games to create Farm Land?

Homa was very helpful in the ideation phase, they pointed us toward mechanics that they had experienced in previous games and other visual aspects they had proven with market testing. They really helped us steer the game in the right direction during the development phase. It started as a conversation and it unfolded rather naturally.

"Homa was very helpful in the ideation phase, they pointed us toward mechanics that they had experienced in previous games and other visual aspects they had proven with market testing."

6. How long was Farm Land in development for?

We started prototyping at the end of February. We had a CPC test centered on core mechanics ready in two weeks. As this showed traction we proceeded with developing the meta with two extra weeks. The first live test showed great engagement metrics so we fleshed out the game with content, mini-games, polish and player love during the next months to reach global launch in mid April. This is an unusually long development cycle for Hypercasual but the game outgrew the initial vision toward a much larger scope. This process was validated by metrics every step the way. We believe that this cautious metrics-driven approach to improving player engagement makes it totally worth the while.

7. Generally speaking, what is your thought and design process when it comes to creating a game?

We try, in general, to start with an experience we believe the players will enjoy in its simplest form and build around it. It can be something visual, an idea or a sensation. Once we validate that aspect tied to a game mechanic we take it from there and start iterating. As we add layers of features and complexity to the game we try to stay true to that original idea and build retention and monetization frameworks in a way that genuinely benefits the player to enjoy this experience rather than getting in the way.

8. What programs or developing engines do you use to create your games? Is there a secret recipe for game-making that you’d be willing to share with developers?

We are working with Unity. We developed quite elaborate frameworks in order to accelerate prototyping in genres that we have already invested a lot of time into such as idle games, this helps us hit the ground running and focus on the core gameplay rather than the systems when we want to try something new. Our art is made mostly with Blender.

9. Do you have any advice for developers starting out in mobile game development?

Just try things out and don’t be afraid to ship something to the store. A lot of developers fear that their game is not good or finished enough to be presented to an audience but, ultimately, it’s really player feedback that keeps you moving and learning.

10. We noticed a number of games you’ve created on mobile fall into the category of Hypercasual games… Do you anticipate that this is a category of mobile games that will continue to trend among mobile developers?

Hypercasual is great because it’s a huge melting pot of ideas and experiments. Literally every developer can try their luck on this market. Reaching success in Hypercasual, though, requires some commitment, grit, and discipline. I am sure Hypercasual is here to stay although, as most things in mobile gaming, it will probably evolve into something different. It is a cycle, we all have work to do in order to stay relevant.

Oh, the games we’ll make… We’re kind of making this stuff up as we go though ;)

12. According to Homa Games, your quality of production is excellent. What is your method? Any secrets?

Thanks for the compliment. Coming from AAA games I try to set a relatively high bar in terms of polish, I also try to infuse our productions with a few technical rendering tricks that set them apart. We try to keep art simple and expressive and serve it with optimized code that allows rich and smooth animation. It is a tough balance to achieve something clean yet universal enough to appeal to a large audience and, more importantly, lean enough as to not waste a lot of time in over-producing assets.

13. How did the tools provided by Homa help you leverage your game?

We have worked with several publishers before and the Homa Belly framework is the most elegant we have come to work with so far. It nicely encapsulates all your system, monetization, analytics, and GDPR needs and they can push updates that developers can refresh straight from Unity. No more ad networks adapters or SDK updates headaches are required. They really can intervene and tweak business-technical aspects while you focus on making your game, that’s a huge time-saver.

"We have worked with several publishers before and the Homa Belly framework is the most elegant we have come to work with so far. It nicely encapsulates all your system, monetization, analytics, and GDPR needs."

I wish I had a recipe to trigger that. In my opinion, good ideas can come from anywhere. They are floating around, in your house, at the café, on TV, in every mundane or extraordinary moment of life, waiting to be caught. It’s really about being open and curious to seize them when they are in front of you. Just ask yourself «What kind of game would that make?». When those moments of bliss happen and it clicks don’t wait too much and start prototyping.

I am really humbled by the sheer creativity displayed by developers in the space right now. Nowadays there are a lot of very successful games based upon very simple ideas, one could easily say «That’s so simple I could have had that idea», the hardest part is actually to recognize that an idea that simple could lead to commercial success.

At Homa Games we're always looking for the best games and teams. If you have a great game in the works, don't hesitate to contact us for publishing opportunities.