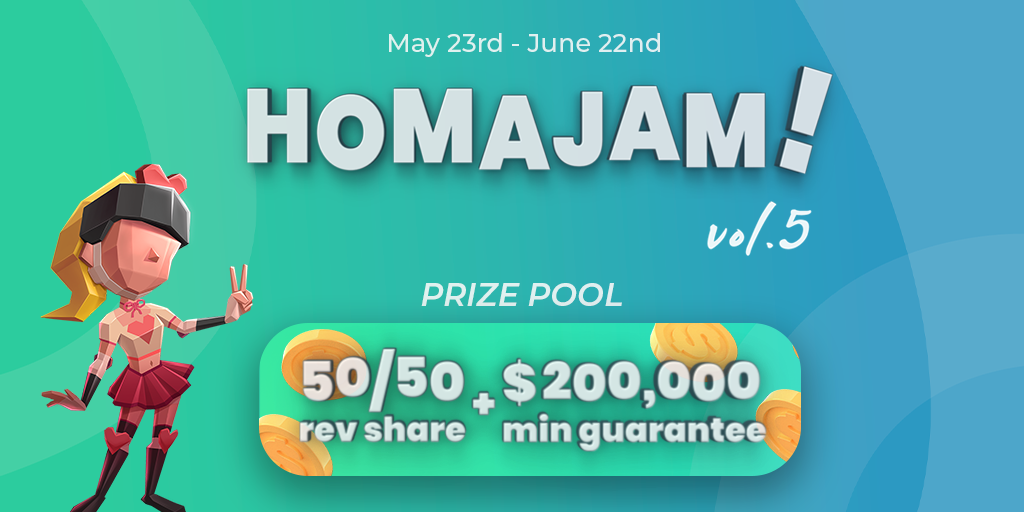 We are thrilled to announce that we will host a 5th edition of the HomaJam in May 2022 with the support from Google. The jam participants will benefit from the expert Google workshops, will be able to create and publish their monster hit games, and win outstanding prizes. Homa Games will announce the jam theme during the opening ceremony on May 23rd.

In this jam edition, we have decided to reward developers along each publishing process step. The participants will be able to win a prize for the best game idea, prototype, or marketability, without having the best-published title. HomaJam prize pool has increased to $200,000 & 50% of the publishing revenue share. There will be five categories of awards for each stage of the publishing process; therefore five guaranteed winners.

Since its first event in September 2020, Homa Games has joined forces with industry players such as Nerf (Hasbro), Facebook Audience Network, GameAnalytics, and Sorare for previous game jams.

As in previous editions, HomaJam v5 welcomes both experienced and novice game creators.

“HomaJam series became a unique Rendez-Vous for our community of developers over the years. In the fifth episode, alongside Google as the main sponsor, we are excited to bring a new opportunity for developers to learn to build mobile games on a trendy theme spotted by our Market Intelligence Team,”—Olivier Le Bas, the CRO of Homa Games, stated.

The registration is open until May 23rd, and participants will have a month to develop their prototypes and submit them by June 22nd.

Throughout the month, you will have the chance to attend masterclasses from experts within the gaming industry and a series of Live Sessions to ask questions and get inspiration and additional game ideas.

With constant support and a dedicated Discord community server, every game developer will have access to resources and tools to leverage their game.