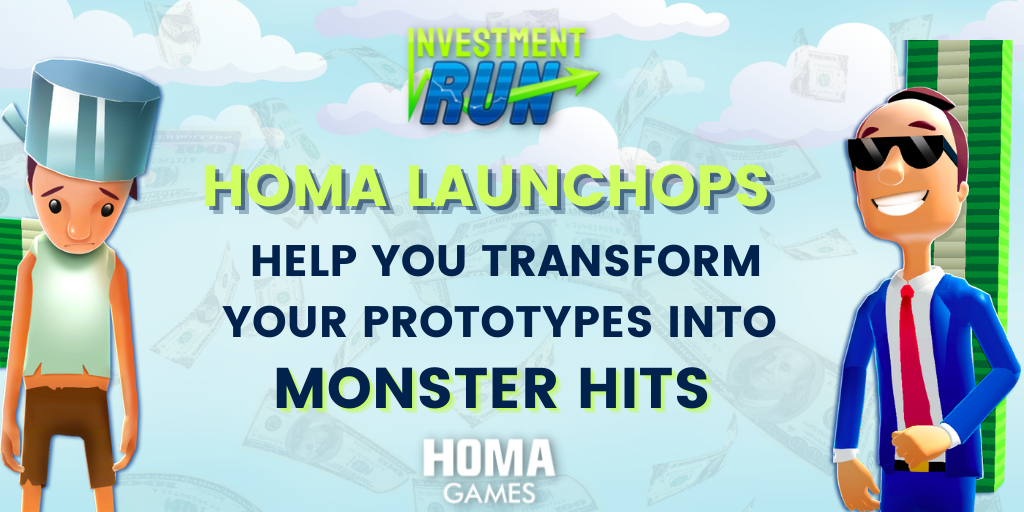 So what exactly happens once you submit your prototype at Homa, and how does it all work? We'll take you through the process and explain all the essential info you need to know about scaling your next hit.

The main challenge behind game publishing

Publishing a game might seem straightforward; however, the list of actions to make it the next hit is quite long. In a short period, you need to make sure there are no bugs, the ad monetization is working properly, the testing metrics are good, & the data is analyzed correctly. Don't you worry; the Homa Games team is there to help you figure it all out!

The Homa Squad supports each step of the publishing process.

The most challenging part for developers happens during the pre-launch phase when the prototyping is done. You might think that you are super close to publishing & reaching the top, but KPIs don't allow you to move forward. Many games get killed during that phase. Well, this is where the Homa's LaunchOps step in. The next part of the article will discuss their role in publishing.

The Homa’s LaunchOps team is there to take on the two main missions.

The first mission is to provide ad-hoc support to studios by helping them on one of the following topics:

The second mission is to take over a game right after the Live phase to add classic meta-feature and optimizations to improve LTV and the game's profitability. To avoid breaking the game’s KPIs and LTV, we test all changes through a well-defined process using A/B tests and daily monitoring stats and LTV impact. This “iteration” process can last up to 2 or 3 months.

It allows to boost development time and not reinvent the wheel for each game.

Homa Games’ LaunchOps team has already worked with many chart-topping titles, which has helped find a customized approach for each studio and develop the best in-house tech for every developer.

Let's dive into the success story of Investment Run to understand the LaunchOps team's role better while publishing your title.

Investment Run is a hit-runner mobile game that reached 4.4 million downloads on Android & the top 3 charts in the US, Brazil, and India. On Apple Store, the game attained 2.6 million and top 3 in the US, UK, and Canada.

Two professionals from the Mamau studio developed the idea and reached out to Homa Games to help grow the title.

"The process was exciting. When the game started showing promise, we needed to move quickly. Thankfully Homa Games' internal team was super reactive and helpful, and we are delighted with how everything panned out." - the Danish studio says about the publishing process with Homa.

Homa LaunchOps team not only focused on the three pillars discussed above but also took over the game after being launched for months to improve metrics after going live.

Within 1,5 weeks, the team added three more worlds & levels to the game, implemented meta, and created additional gifts & events. The Launch Ops also continuously worked on the FPS & bug fixes that helped improve the overall in-game metrics and performance. FPS has been increased to 40 on Android on 50 on iOS, and the loading time has been reduced by 70%. We have also fixed some crashes and lags in the game.

"The onboarding was smooth; both teams were flexible, which avoided unnecessary efforts. Another great point was the technical transparency—Homa Games' team shared all tools and info."—Mamau team about the success reasons.

The Homa Games team helped to achieve more development & art capabilities. The Creative team worked autonomously thanks to their knowledge of the industry standards. As a result, more than 250 creatives were tested, out of which three winning concepts were identified.

Homa Games helped to set up the N-testing & A/B tests. The biggest wins were decreasing the character's speed, changing the colors of doors, and removing the sensitivity of controls. These changes brought an uplift of 9-11% in LTV in Android, US.

"We are very impressed with the work done on the A/B testing inside Homa Lab. Homa Lab's features on A/B testing helped with complex decisions when scaling a Hypercasual game like Investment Run."—developers thought about the Homa Lab.

Support after the Live phase

Currently, the LaunchOps team is working on an important A/B testing strategy to improve the LTV throughout ad pressure, optimization of the level design, a new end of a level mechanic, and meta-features for mid-term and long-term retention.

To sum up, game development is a fast-paced process that requires instant actions and reactive partners. Ideating & prototyping is one thing; however, you need good KPIs to get your game published & reach the top charts. Moreover, you want your game to live longer, so you need to look after the title and metrics even after the Live phase. Luckily, Homa Games LaunchOps can take care of everything.

So be sure to play Investment Run, available on IOS and Android, and stay tuned for the following articles to come in our blog.