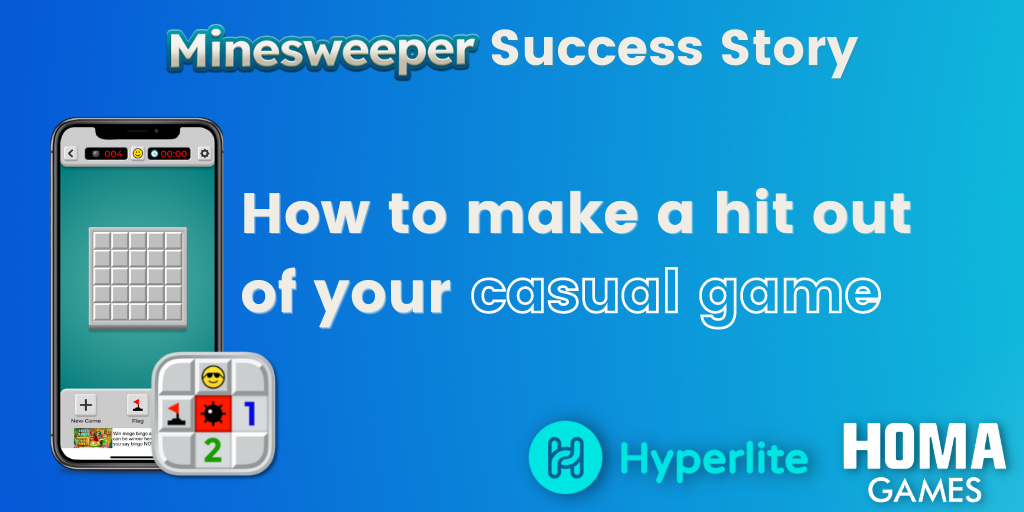 Hyperlite Studios was founded by two experienced brothers from England—Robert and Mark Day. They both previously worked in successful gaming companies like King, Tripledot, and Google, which helped them start their project. In April 2021, they released a mobile game on IOS, Minesweeper Puzzle Game, that echoes in players’ memory as a board game from the 90s.

Hyperlite studios needed to improve User Acquisition (UA) metrics and grow the casual title, which is why they decided to partner with Homa Games.

Today, we celebrate the collaboration's excellent results. This case study will summarize the main achievements and learnings of working together on Minesweeper.

Hyperlite needed a different approach in UA, Monetization, and in-game metrics for Minesweeper. When the game first launched, it received 28.4k monthly installs, the retention of D1 was at 27.6%, and the LTV of D1 was $0.08. The gameplay needed improvements, so Homa Games' team of UA, Monetization, ASO managers, Ad Creatives, and its N-testing in-house technology stepped in to help the studio work on these aspects.

By focusing on identifying the root causes for several bugs and crashes in Minesweeper, Homa’s product team identified room for improvement as the game scaled significantly. Providing quick fixes to these optimization issues brought a +2pts RRD1 & +2pts RRD7 for the game.

In 1 iteration of the game, teams pushed for skins added for the Minesweeper board and a change in animations and mechanics, which had a +20% impact on the LTV.

Daily Reward / Leaderboard / Challenges were consistent throughout the partnership and helped achieve the current heavy retention potential on D30—9.58%.

Revamping the game flow brought an uplift of +9%, starting D1 of Playtime & Retention. Many users didn’t understand how one should be playing a complex game like Minesweeper. First Time User Experience (FTUE) made it possible for new players to understand this board game from the 90s'.

The team & Homa brought a new feeling to the game by implementing UX/UI changes and making the game’s experience better than the competition.

Homa increased IS frequency by 15% on days 3-10 and improved the offline level rewards by 17%.

After changing the ad mediation platform, working on the waterfall optimization brought an increase of 15% in eCPM for the different ad placements on both OS (AND & iOS US, Banners, RV & IS) .

After extensive work on all of the points mentioned above, the main achievements happened in Minesweeper. Let’s have a look at them:

In this 1 year partnership, outstanding results have occurred and all the goals have been achieved. The infographic below will showcase the main takeaways of this collaborative work on Minesweeper.
‍
Check out the Minesweeper Puzzle Game today! Available on  IOS and Android.