The future of in-app bidding is now 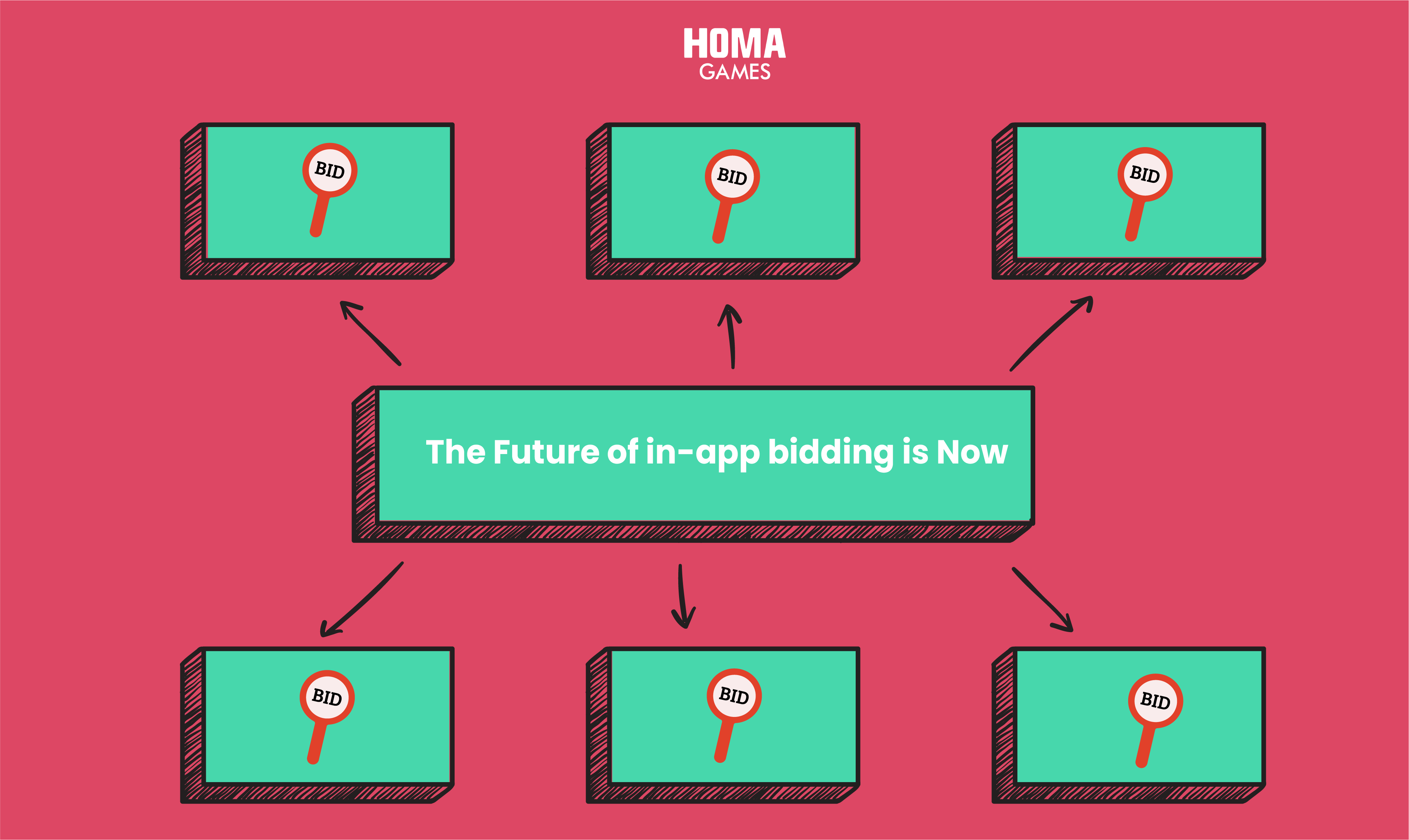 It’s no secret that in-app bidding is ready to revolutionize the mobile advertising industry by offering a democratized advertising solution. Today, all advertisers have the opportunity to bid on an impression simultaneously, bringing fairness, transparency, and efficiency to mobile advertising. However, the question that is on everyone’s mind is: ‘’Who truly benefits from this unified auction strategy?’’

Some of you may have already heard of the terms “header bidding” and “in-app bidding” but, what exactly are the subtle differences between these two concepts?

Let’s first take a look at header bidding. This bidding technology appeared in the online advertising industry in 2015 when a new programmatic advertising method granted advertisers access to the publishers’ ad space inventory and enabled them to “pre-bid” all on an impression simultaneously. This meant that publishers were aware of the best offer submitted by all advertisers, and the highest bidder would win the right to show the impression.

However, this technology was only available on the desktop environment,  a constant issue for mobile advertisers. Since advertisers were unable to apply the header bidding method on mobile, they were then forced to adapt, and as a result, the concept of ‘’waterfall bidding’’ was born.

This method is based on the practice of publisher ad servers’ prioritizing certain ad networks based on a flat price set by publishers. It can create inefficiencies whenever an impression is sold to Network A at the publisher’s asking price, even though Network B would be willing to offer a higher price for that same impression. However, this method was the next best thing as it allowed publishers to optimize their waterfalls based on performance. Further to this, as the waterfall method requests an impression from each advertiser until one agrees on the asking price, many advertisers do not have the opportunity to even reply to these ad requests, rendering this method less than ideal.

‘’In-app bidding’’ came in to revolutionize the mobile advertising industry, bringing more fairness to the auctions, increased transparency on bids, and efficiency on processes as all advertisers now simultaneously bid on a single impression.

Today, most ad-media players are developing their in-app bidding software, with Facebook pioneering the field. Key networks in the industry, such as Applovin, Tapjoy, ironSource, and Mintegral, have joined Facebook to become best practice examples for optimal use of the technology.

ironSource in particular is, for the time being, using in-app bidding only in their own mediation. However, it remains unclear why but we can speculate that the network may be testing the technology in-house to perfect its use with its own mediation data. However, other networks are moving fast on their own integrations because of existing mediations in the race to becoming the first adopter of the new bidding system and gain market share...

Paraphrasing the band TLC on one of their most famous hits –Waterfalls– it’s time to stop “chasing waterfalls.” Moreover, if we continue following the expert mobile advertisement advice of this 90’s band, advertisers should “stick to the rivers and the lakes that they’re used to.” Even though this song was released in 1994, that’s the current truth about mobile advertising. Advertisers should stick to the “rivers” of header bidding advertisements that have been around for a long time and leave the waterfall method behind.

At Homa Games, the strategy is clear: keep our monetization processes updated with the newest technologies and ensure maximum efficiency at all times. We achieve this by prioritizing two key goals; the first is to master user level revenue data. Our second ambition is to update our waterfalls with in-app bidding, which has proved to be more challenging, given the lack of data on the technology’s real benefits. Nonetheless, our partnership with ironSource, MAX, and MoPub, has enabled Homa Games to become one of the first hypercasual publishers to implement this new bidding strategy.

The question remains, who are the real beneficiaries of in-app bidding? The publishers, the advertisers, or the users themselves? The answer is very straightforward: they are all winners. Let’s take a closer look at the benefits of in-app bidding for each of these players.

As mentioned earlier on the topic of the waterfall method, advertisers are ranked by publishers based on a flat price, meaning that networks are called one after another based on their position in the waterfall. A critical issue with this strategy is that, regardless of Network B willing to pay more than Network A for an impression, Network B would not have the opportunity to bid on it as long as Network A is contacted first and accepts the publishers’ asking prices.

In-app bidding solves the issue of lack of opportunity for advertisers as they can now offer their highest bid for a given impression and have the chance to win the right to show an ad.

While advertisers miss bidding opportunities with the waterfall method, publishers are losing out on maximizing revenue.

Suppose a publisher is never aware of the highest price a network is willing to pay for a given impression, given the publisher’s high probability of not accepting this highest price it’s fair to assume that every time an ad is shown using the waterfall bidding method it is not generating the maximum amount of revenue possible to the publisher.

Considering this, in-app bidding brings transparency to the real highest prices advertisers are willing to pay for each impression. As well as this, the new method will reduce the time publishers spend on optimizing their waterfalls. Such process efficiency enables publishers to create better content for users rather than always thinking about maximizing their ad inventory pricing.

As noted in the benefits of in-app bidding for publishers, users benefit from enhanced ad experiences due to publishers being able to dedicate more time to creating quality content.   Lastly, by allowing all advertisers to view publisher inventories with in-app bidding, ad networks can now bid on the right ad for the right user. The advantage for users here is they are receiving a bespoke advertising experience.

‍
The future of in-app bidding is now

The year 2020 will be marked by in-app bidding. While all publishers and advertisers will benefit from its use, the technology will propel early adopters to the forefront of the mobile advertising industry. Several networks have, in fact, already begun implementing header bidding. However, it will be essential for the mobile ecosystem to adapt and accept this new technology, guaranteeing a quick and effective transition from the waterfall method to in-app bidding.

It’s time for mobile advertising to stop chasing waterfalls and focus on new rivers by taking advantage of a more equitable and rewarding bidding strategy.